Last night at the Growing Business Awards, Bridges partner Antony Ross handed out our first ever Bridges Positive Impact Award – a new category designed to recognise growth businesses that are having a positive impact on people or the planet. The standard of entries was remarkably high, but ultimately the judges picked a winner: Bambino Mio, a UK-based firm that makes re-usable cloth nappies (and other ‘change time’ related products).

Disposable nappies account for about 15% of all domestic waste that goes to landfill. So by encouraging more parents to switch to cloth nappies, Bambino Mio is not only having a huge environmental impact; it’s also reducing a big expense for cash-strapped Local Authorities. And with the current focus on single-use plastics, its message seems more timely than ever – which perhaps explains why turnover jumped over 80% this year, to about £6m. We spoke to Bambino Mio’s co-founder Guy Schanschieff about the company’s journey:

The original incarnation of the business was inspired by a chance conversation at the Taj Mahal.

Guy and Jo, the husband-and-wife team behind Bambino Mio, first started thinking about nappies while travelling the world before they got married. They got talking to an American at the Taj Mahal, who told them about the success of nappy laundry services in the U.S. – and they subsequently heard similar stories from other travellers about businesses in Canada, Australia and New Zealand. This inspired the pair to set up one of the UK’s first nappy laundry services when they arrived home.

They switched to product sales in the belief that it was more scalable than laundry.

“At our peak we had a few hundred [laundry] customers,” says Guy. “As a scalable business model, it probably wasn’t going to work. And actually if we look at the business now, money-saving is a big thing for parents who use washable nappies – whereas using a laundry service costs the same money; it’s really just the environmental benefits. We were [also] being asked more and more whether we would actually sell the products that people could wash at home… At the time [that] seemed so much simpler than getting up at six o’clock in the morning to drive a van around and collect dirty nappies!”

The brand name was a happy accident.

After a successful experiment with placing ads in baby magazines, they came across another nappy laundry owner who’d put together a brochure of products using the brand name Bambino Mio, and had even printed ten thousand copies – but didn’t want to carry on. So Guy and Jo took on the brand name and the brochures. “Lots of people say what a clever name it is… It wasn’t clever at all – we did it to stop somebody doing a similar business to us throwing away 10,000 brochures!”

International expansion was on the agenda right from the start.

“It’s interesting in baby: because it’s a finite market, you either need to keep sticking other products on your portfolio, or go and find other markets – which is what we decided to do. We’ve always felt very strongly we wanted to be seen as the leader in the market, the go-to washable nappy brand.” Via international trade fairs, the business built up a network of distributors in Europe and beyond.

But the recession of 2010/11 forced the business to change tack.

“Literally in the space of a month, our two biggest distributors stopped ordering from us. So we effectively lost a third of turnover in the space of about four weeks.” With no sign of an imminent recovery, they were forced to retrench – which included making around half their staff redundant. But ultimately, the business would emerge stronger, with a new and improved sales and marketing strategy. There was a greater focus on targeting big supermarkets, in an effort to drive volume – and on marketing directly to international customers, rather than relying on distributors. “People who were now having babies had grown up with the internet. So we were beginning to develop our approach to social media, to Internet, to email, to working with bloggers… All those aspects of digital marketing [were] working really well for us in the UK, and really driving our business forward… And so we thought well, maybe we could do this internationally.”

The business has also benefited from changing consumer attitudes.

When Bambino Mio launched, only about 3% of parents used disposable nappies. “Our original mission statement was to make washable nappies commercially acceptable worldwide. We felt it had a fantastic story – money-saving, environment, health… That story just needed to be told.” Digital marketing made it easier to get these messages direct to customers, and drive them into stores. At the same time, awareness of the environmental impact of disposable nappies was growing – which helped to make washable nappies more fashionable. The recent focus on single-use plastics is also helping to make their case. “And there’s a little bit of a snowball effect now, because the great thing is there’s lots of parents who love our products… They’re the best advocates.” Today, over 30% of parents have tried reusable nappies.

Guy believes reducing disposables can have a formative effect.

“If we want to change attitudes to being a throwaway society, I’ve always thought it strange that for the first three years of a baby’s life, what they are watching a few times a day is you just throwing that nappy in the bin. It’s just a really weird message.” As he points out, it’s the children being born now who will be having babies themselves in 2042, the point at which the Government has committed to have eradicated single-use plastics. But how to get there? Baby steps (appropriately): “We often say: even if you just buy one washable nappy, and use it once a day or once every other day – you’re still saving money, you’re still doing your bit for the environment; you’re still not putting the plastics and chemicals next to your baby’s skin for the time that nappy’s on. And if we can make that accessible and easy, more parents will do it – because most parents don’t want to be throwing disposables in the bin.” 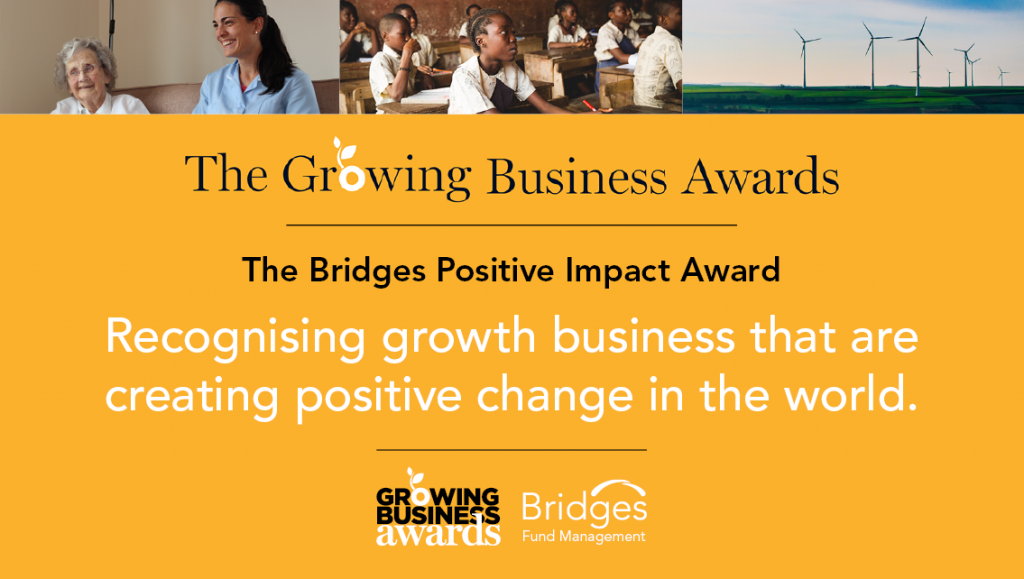 After decades on the margins of finance and philanthropy, impact investing is finally…

How the B Corp framework can add…

Stefanie Kneer, Head of Impact Management at Bridges, explains how the B Corp…